Hello little NAS why are you trying to talk to Russia?

In a recent post I talked about securing your home network, so of course I want to make sure I practice what I preach.  My main server recently suffered some hardware failure, there was nothing critical on it so I am in no hurry to get it back up and running.  I took the opportunity to find something more dedicated to run the file sharing on the network so I picked up a QNAP  TS series device.  I figured yeah, this should do what I need.  Well I didn't realize that was able to replace most of the services that my bulky Dell server was hosting.  After getting it up and running I found it to have a slew of useful services like VPN, media server (DLNA) services, and of course file storage/sharing.  So I got the thing running, connected up the big USB HDD and restored all the shared paths and such.  Eventually I got the VPN working and made sure managing it was only done through SSL.

So I had it going for a couple weeks without any issues, until the morning I decided to check out my network traffic.  I saw some odd stuff in my firewall logs that didn't make sense, and they were coming from the QNAP system.  It started because I saw a good deal of inbound UDP traffic being blocked.  UDP is basically TCP's bastard cousin.  It is not typical for legitimate internet services to use UDP.  So I checked out some IP addresses and they were coming from the usual oversees locations.  No big thing, most likely internet scanning on UDP to see if anyone's firewall will allow it through.  So I continue through the log and notice outbound UDP traffic.  I panic a little and then notice it is going out over 6881.  Now my lovely firewall allows me to do an on-demand packet capture, which is handy as it sits between my LAN and Internet, so it can see everything.  So I ran the capture and then filtered the results in Wireshark:

Notice the many different non-US destinations?  Yeah that didn't sit right with me.  Did some digging as I have not memorized all my TCP/UDP port numbers and found that this is typical of BitTorrent listeners.  I did some additional searching and found that the QNAP has a Download Manager service that comes turned on by default.  This download manager runs like a Torrent listener so this is beacon traffic to the torrent network.  I took a look at some of the packets and found it to be random garbage, nothing malicious.  But still, that is traffic I don't want going out without my permission, least of all to overseas locations.  I made some changes on the firewall that would automatically block traffic based on country of origin and found a nifty forum post about disabling the feature and hardening the device further. 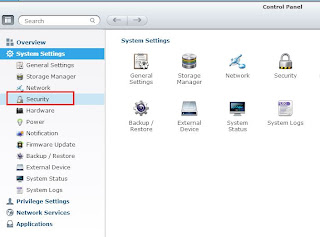 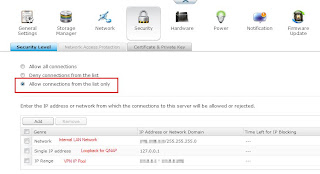 So that is it, piece of cake!  Once you make the changes it will restart the network services, so you may lose access to the shares for a minute or 2.  After I made those changes the traffic pretty much stopped.  I am still getting a bunch of inbound UDP getting blocked but that should decline as well.  Anyway hope this is helpful to some folks.  The device is pretty useful but again, don't always trust the default settings or apps.  Take the time to understand what you plugged into your network!  Any questions feel free to leave a comment below!

***UPDATE***
So quick update on the network security... as I sit here waiting for my plane to Louisville for DerbyCon 2013, I decided to test my VPN to the home office.  It wouldn't connect, so through other magical means I remoted in a different way to check the systems.  Firewall check!  It was passing traffic nicely.  So logged into the QNAP where the service is hosted and immediately saw the warning indicator for unauthorized network attempting to connect on my VPN port.  Nifty, that made fixing the issue pretty easy.  Made the necessary changes and all is working now.  So if you lock your QNAP down and use the VPN service, you may need to open some ranges or just not use the block networks piece.  The VPN is only temporary until I can bring up a new full time server.